“I felt that it was really cool”, interview with winner of The World Series of Vaping 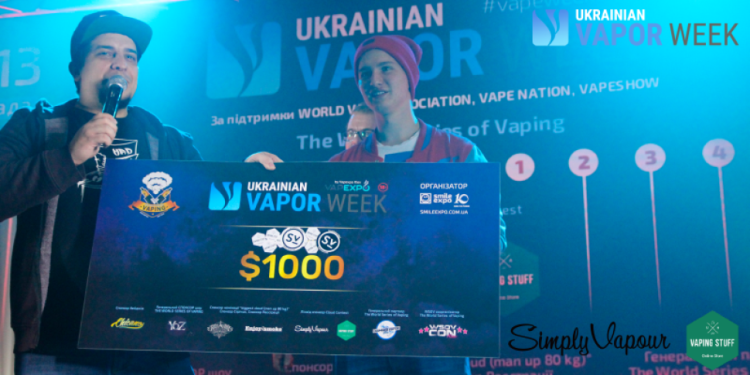 On November 12-13, a cloud chasing tournament – The World Series of Vaping – took place within the greatest vape event, called Ukrainian Vape Week. Participants produced the largest vapor clouds on the stage and honest juries determined the best ones in announced categories.

After champions’ rewarding, we managed to talk to the cloud contest winner in the Biggest Cloud men’s category (up 80 kg) Mikhail Yarovenko and questioned him about his impressions.

UVW: Good afternoon, Mikhail. Share your impressions of the victory. Have you even expected to become a winner?

M.Y.: No, I haven’t expected. It is my second cloud contest. I crashed out of the first one at the early stage. I became greatly upset. And this time I came to VapeWeek with my friends. They supported me, provided with positive thinking and I was lucky.

UVW: Did you prepare to the tournament?

M.Y.: I did. I watched videos with experienced cloud chasers from the USA where they told about their techniques. I also improved my own technique and coil building. I chose the latter very long and when determined, knew that I had a big chance to win the tournament.

UVW: Misha, have you been a vaper for a long time? Have you smoked before?

M.Y.: I have been vaping for almost a year. Prior to that, I smoked 2 years and once I visited my friend to shoot pool. Then he told me: “Give up smoking, I have already done this”. I asked how he did it. He showed me his device – SMOKTECH TFV4. I inhaled and started coughing hardly, but after the third or fourth inhale I felt that it was really cool: taste and others. That time, I thought of buying my own device. The first one was Zephyrus RTA tank that burned from one puff, but I get accustomed later.

UVW: It is not your first visit of the vape exhibition. What are the differences between Ukrainian Vape Week and other similar events?

M.Y.: VapeWeek has unique atmosphere. MCs matter a lot: Mihey along with Alex just rocked the crowd. They constantly stream together and have their own approach to jokes. If you are great with streams, then this exhibition is straight fire for you!

UVW: Thank you for the interview, Misha. Wish you the new victories.

Follow Ukrainian Vape Week news: there were a lot of interesting things!

Do you want to become a part of live vape community? Then register to this year’s last vape event – VAPEXPO Moscow 2016 – that will take place on December 9-10!