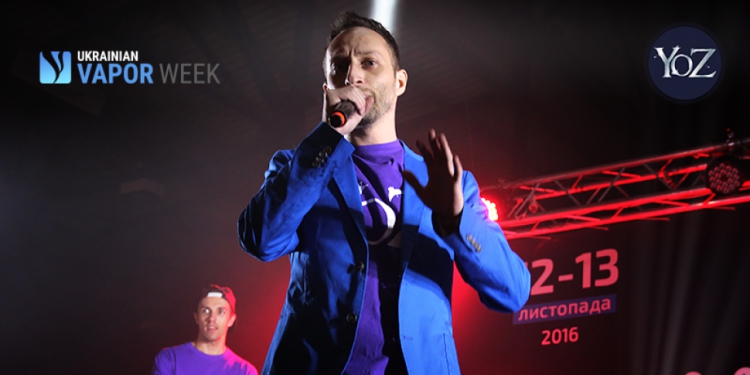 On November 13, a talented singer Misha Krupin performed on the stage of the international vape event Ukrainian Vape Week. He works with famous artists (Timati, Bogdan Titomir, Anna Sedokova) and has been also well-known for a long time, although he does not pursue fame. We met Misha after his performance at VapeWeek and talked about vaping a little bit.

UVW: Misha, have you been using vape devices for long?

UVW: And why did you shift to vaping?

M.K.: I did not shift. I had been smoking a lot and for a long period of time, and decided to give up. And I did it without electronic vaporizers. Two or three months later I tried vaping and I liked it.

UVW: What eLiquids do you prefer?

M.K.: Oh, different. Have just tried the American Aisle7 Flacked from Diamond Vapor, and I like it. I have eJuices from YOZ and other manufacturers. I have lots of them, my tastes change all the time, there are no concrete flavours.

UVW: Are you for the first time at such vape event?

M.K.: No, I attended VAPEXPO before.

M.K.: Yes, there are differences – VAPEXPO offered many things for beginning users, and here lots of original products are presented, everything is intended for experienced vapers and cloud chasing.

UVW: And what about the audience? How does vaping community differ from ordinary viewers of your concerts?

M.K.: Vapers are absolutely different, they have various tastes. If you are a vaper, it does not mean that you are the same as other vapers. On the contrary, it means that you are unique in all aspects. Not only in vaping.

UVW: What would you wish the guests of the event?

You can find more information about the upcoming events on the organizers’ website, Smile-Expo company.