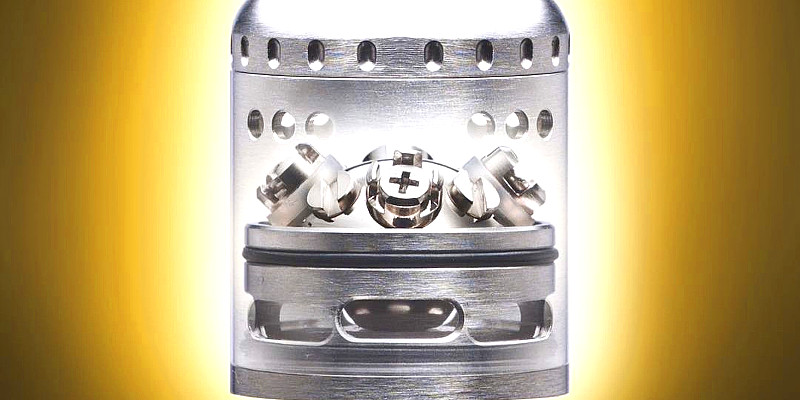 Rivals of Coil Master seem to be impressed by cosmic approach of drip tip Monstruito Flying Saucer creation. That is why today we have an opportunity to talk about the next unearthly novelty – drip tip Sputnik RDA, this time by Vapor Plume manufacturer.

If a user follows atomizers’ reviews, then most likely he is long used to the standard solutions for airflow design, rebuildable decks, etc. However, there is always someone who is able to ignore the routine and invent a know-how. Vapor Plume Sputnik is just one of such devices.

The official website shows no technical specifications of the novelty, however, according to the photos, the device is something out of this world. Just a deck itself deserves a special notice. However, time will tell whether it is good in practice.

The deck has a shape of hemisphere with four posts (a pair for each polarity). Although the size of the rebuildable deck may seem a bit small, but this has its advantages. Firstly, during instillation, the liquid slips down the sphere and gets right on the cotton. Secondly, convenient clamping system: spiral ends do not interfere with each other, so they are easy to unfasten.

There is much to say about airflow system as well. It is represented by upper and lower air supply to the maintainable chamber. The adjustability is also provided. According to the photos, we can assume that at usage, slots can be altered, and this is a huge advantage for all lovers of tasty vapor.

An obvious conclusion offers itself: a new distinguished engineering solution with attractive performance and stylish design. We will be looking forward to the appearance of Sputnik RDA by Vapor Plume on the market.