The first massive Cloud Making will go down in history 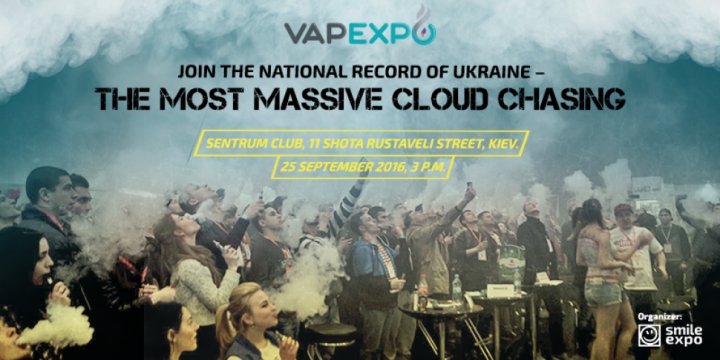 September 25, 2016, at 3 p.m., Sentrum metropolitan club on 11 Shota Rustaveli Street will bring together Ukrainian vapers to achieve a record in the amount of producing vapor. An achievement will be legally registered and put in the National Register of Records of Ukraine 2016.

Cloud Making is a unique event: its participants will create as big and rich vapor cloud as possible that will be measured and recorded by official representatives of National Register of Records and will be put in the corresponding book.

The idea provider and implementer is Smile Expo, the organizer of the second international exhibition and conference – VAPEXPO Kiev-2016.

The aim of the record breaking is not only to create the biggest vapor cloud exhaled by vapers using modern electronic devices but also to show the less harmful way of “smoking”.

In recent years, Ukraine has been showing a rapid shift from traditional cigarettes to electronic devices. It is caused by the fact that the vaping process doesn’t include tars and combustion products, in other words, it is less harmful than common analogues.

The amount of participants is unlimited. Thus, the organizing company invites all vaping device owners to make their contribution to the creation of the biggest vapor cloud and come down in Ukrainian history.

Prerequisites for participation in the record breaking: