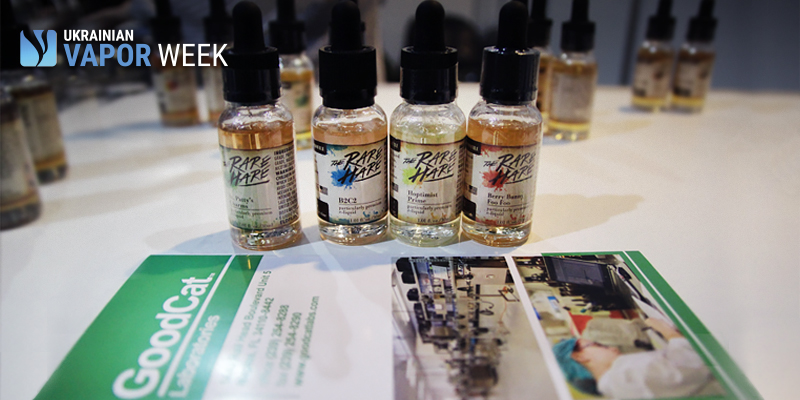 Vape event Ukrainian Vape Week, which was held on 12-13 November, is one of the most significant events of the year in the world of vaping. VapeWeek brought together a lot of well-known manufacturers of devices and liquids for electronic inhalers. But the event also included a special guest: GoodCat Laboratories – a lab on the production of e-liquid components. There are only three such laboratories in the whole world.

The first thing that attracted visitors’ attention to the company’s stand is the name. “Good cat”. No kidding? Where does it concern vaping?

As company representative told us, the name was chosen not accidentally. GoodCat Laboratories founder wished the company to be associated with something soft, tender and fawning. And what can be tenderer than a good cat?

And now a few words about the laboratory. It is located in Naples, Florida, United States. For more than seven years it produces eLiquid components. The company is registered as medical factory and meets all regulatory requirements of the State (21CFR p. 111).

It produces 3 million bottles of various components per month!

Currently, the company decided to extend its boundaries. Having all necessary resources, great experience and knowledge about true premium eLiquids composition, GoodCat Laboratories has launched the production of its own series of Juice – The Rare Hare. It was presented at the Ukrainian Vape Week. The series includes 4 e-liquids now. According to GoodCat Laboratories representative, it is the taste that premium eJuice should have.

As judged by adoring faces and feedbacks of those who tried the product, it was something of extra high-quality. Probably, scientists of certified lab on eLiquid production do know the main secret of a premium product creation.

Read other interesting facts about Ukrainian Vape Week in the “News” section.

Soon you will be able to enjoy new vape events from VapeWeek organizer – Smile-Expo.

Learn about the upcoming vape events!