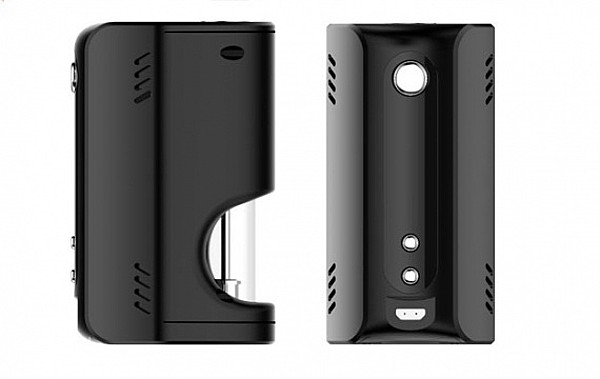 Recently GeekVape has decided to have a shot at the market of box mods. It has already presented several models, and today we will review company’s first squonk mod called GBOX S100.

It is surprising that GeekVape has suddenly decided to create its own squonk. Perhaps, such mods have great potential, and their popularity is gaining pace.

To begin with, the majority of manufacturers equip squonks with 50-70W chips, but this mod is a different story. To keep up with first-rate mods and expand the range of potential customers, GeekVape has decided to produce a 100W mod. Essentially, this is a right decision, as this capacity is the needed minimum rather than potentiality.

Manufacturers have managed to equip the device with two 18650 batteries and a rather large flask. At the same time the mod does not look bulky and it is convenient to hold it. Nothing is said about the capacity of the flask, but there is one extra in the kit.

Under the main buttons you will traditionally find a USB port. It would be great news, if the manufacturer allowed upgrading firmware of GBOX S100 through it.

Besides that, to secure the user, designers made holes for ventilation on the hips of the mod.

The first squonk mod from GeekVape has turned out to be very successful. Despite the lack of experience, company has managed to develop a product that can easily compete with other market players.