Conspiracy RDA by Tobeco & Ohm Nation – stronger than a bullet 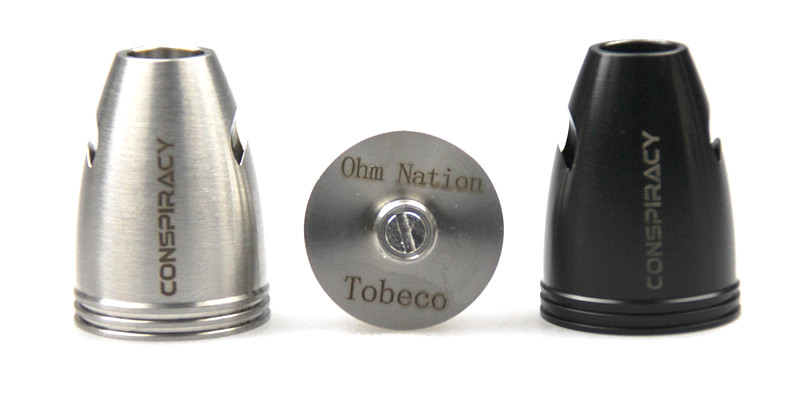 American company Ohm Nation is well-known among consumers due to unusual design of gadgets. It closely collaborates with other leading manufacturers. New atomizer Conspiracy was branded by Tobeco.

Conspiracy is a handy dripper in terms of functionality, with stylish design, capable of generating lots of vapour. Device can surpass rivals thanks to the exterior look. Atomizer is made from stainless steel, and there is also a delrin cap.

The shape of the dripper resembles a bullet. It has two holes for adjusting the airflow – if you cover them with lips, you will decrease the amount of air supplied to the chamber. It isn’t clear yet how the system will work in practice and whether such designer solution will be used in the future. But there's a time for everything.

The deck is quite standard, and features velocity style posts with 4 big holes, which allow users to install all possible coil builds. The RDA provides excellent conductivity due to copper plated connector, and can be easily used with the latest box mods, as well as ordinary mech mods. The deck can house 1.5 ml of liquid.

Try installing two coils on a 22 mm mech mod, and you will be surprised with the amount of vapour, even if earlier you used other devices capable of producing large amounts of vapour.

Manufacturer of Conspiracy RDA placed a bet on design, slightly giving up on technical characteristics. But, in general, the device from Tobeco and Ohm Nation has all chances for successful promotion among other drippers. Well done!