Boneshaker and Vape Syndicate: the most quick-witted participants of Ukrainian Vape Week 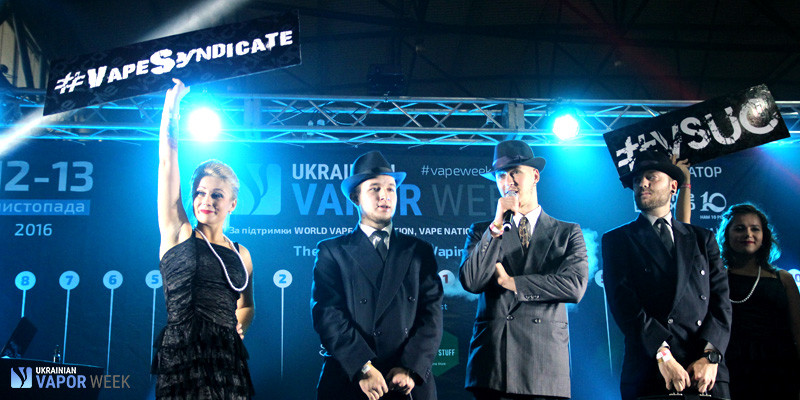 Ukrainian Vape Week, which took place on November 12-13, is not merely an explosive hangout with top-class show program and world brands. The event was a fortunate chance for beginning companies to present themselves to the whole vape community. Enterprising guys from Boneshaker and Vape Syndicate Ukrainian Custom (VSUC) have used this opportunity and convincingly demonstrated their brands.

Not a single visitor left the booth of Boneshaker – domestic e-liquids manufacturer – without attention. Their team organized a small stage with two motor-bicycles on top and gorgeous girls behind the wheels.

They put the eJuices on the fuel tank. Guys attended such an exhibition for the first time, but were certainly remembered by everyone.

Unlike the breadth of Boneshaker, the team of Vape Syndicate did not have a booth at all. Elegant “gangsters” and “Mafiosos” were strolling along the floors and making photos with visitors.

They organized their own contest: everyone who made photos with “syndicate members” and posted them in a social network with corresponding tags, automatically took part in the drawing of eJuices. Winners were chosen randomly and awarded from the stage of VapeWeek.

«Ukrainian Vape Week – is a hangout of vapers that gather to have some rest. It would be cool to organize such exhibitions at least once a month rather than every six months for the community to grow and communicate to the general public that smoking is harmful, and vaping is cool,” shared his impressions from the event the representative of VSUC, Yevgeniy.

Follow the news from Ukrainian Vape Week – there are lots of interesting and important things!